I have been working with Robert Meldrum in developing a Chess Board that may be of benefit to unsighted players. Each Chess piece has been economically designed and engineered to the millimetre to provide immediacy of recognition and contrast. The pieces are called French Defence Notation, and are designed to be scanned by the finger tip from above while also differentiated at the sides where they are grasped, as opposing players of Squares and Circles.

Traditional pieces were used for inspiration although it is very abstract, and flat, and in its current format magnetised, but the pieces are also not intended to distract from the game itself. Additional information is on his website, www.robertmeldrumart.com, look for the link with Manta Ray included on it.

Robert Aims to support organisations that support real innovation like R.P. fighting blindness and would be happy to work with Quality Chess Companies in its further manufacture in the understanding that they too would contribute to them.

Shown below is an Image of a Chess Set, known as a Manta Ray board. Its 28 by 28 by 2 centre meters and have contrasting squares of Acrylic and Metal. 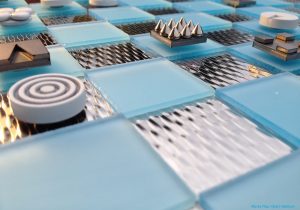 Important: Robert has made a series of Chess Sculptures. These are not to be confused with F.D. notation or the Manta Ray board. They are separate Items. One of them has been offered to R.P. for the funding of there projects but the sales of other paintings or Sculptures will contribute to this project.

This website uses cookies to improve your experience while you navigate through the website. Out of these, the cookies that are categorized as necessary are stored on your browser as they are essential for the working of basic functionalities of the website. We also use third-party cookies that help us analyze and understand how you use this website. These cookies will be stored in your browser only with your consent. You also have the option to opt-out of these cookies. But opting out of some of these cookies may affect your browsing experience.
Necessary Always Enabled
Necessary cookies are absolutely essential for the website to function properly. This category only includes cookies that ensures basic functionalities and security features of the website. These cookies do not store any personal information.
Non-necessary
Any cookies that may not be particularly necessary for the website to function and is used specifically to collect user personal data via analytics, ads, other embedded contents are termed as non-necessary cookies. It is mandatory to procure user consent prior to running these cookies on your website.
SAVE & ACCEPT